Johanna II von Trapp and daughter, Shela Gobertina von Trapp, were interviewed for the Croatian newspaper, Novelist.hr, about their family's history in the city of Rijeka, Croatia. It is not widely known that Johanna's grandparents, Baron Captain Georg von Trapp and Baroness Agathe Gobertina Whitehead, met and married in Rijeka (at the time known as Fiume in the Austro-Hungarian Empire).

[Note: the article is in Croatian] 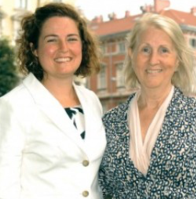