Andy has spent decades as a creative marketing leader within Fortune 500 companies and consultancies. Originally from England, he received a PhD from London's Brunel University  in Business and Management with a concentration in Marketing. Since relocating to continental Europe, Andy has worked in Belgium, Germany, and The Netherlands. Andy’s multicultural background has been integral in his design and implementation of international marketing campaigns, as well as in managing transnational production units. Andy is an authority on the ever-changing marketing landscape and the challenges and opportunities in our globalized marketplace.

Andy is a great-grandson of Sir Frederick Banting, the Canadian Nobel Laureate physician and scientist who co-discovered insulin. Seeking to manage Diabetes, Banting and a medical student assistant isolated the insulin hormone, then the following year he and two colleagues utilized it as a treatment. In 1923 they received the Nobel Prize in Physiology or Medicine for their breakthrough. At the time Banting was 32, making him the youngest award recipient. He was also knighted by King George V and later inducted posthumously into the Canadian Medical Hall of Fame. Banting’s legacy is immortalized in the award-winning television movie, Glory Enough For All. Today, a “Flame of Hope” lit by Queen Elizabeth burns near the Banting House in Ontario; where it will remain, until a cure for diabetes is discovered. 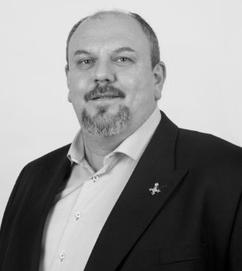